[vc_row][vc_column][trx_block][trx_title]The Sassy Koonz Maine Coon Cattery[/trx_title][vc_column_text]I’m very diligent in all of the research that I do when it comes to making decisions about this journey, including my Maine Coon cattery space.  It was important to me for my breeding cats to have their own personal space as well as my Maine Coon pets and also my husband and myself.

My decision to become a Maine Coon breeder officially began in July 2017. That’s when I really started taking action and learning not only how to get started but how to do the best job I possibly can.[/vc_column_text][trx_title type=”2″]Where will the male cat live?[/trx_title][vc_column_text]When I first started the Sassy Koonz Cattery journey, my biggest concern was housing my male that would be used for breeding. We all know that they’re very likely to spray when intact and that is very stinky. I must’ve researched for HOURS and learned that the likelihood of an intact male spraying is very high.

I have a very clean home, and there’s no smell of cats to be found even though I have three neutered males as pets, so I needed to find a solution for the Maine Coon male first.

Where will he live? Will I feel guilty if he’s not living in the house with us? Is he going to trigger my neutered males and cause them to start spraying also? [This can happen]. 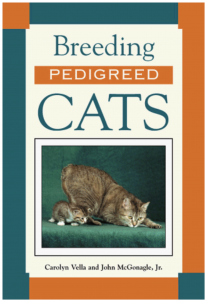 That’s when I discovered an excellent book about Breeding Pedigree cats. One of the very first chapters discusses the issue of housing your males.  It literally says “If you have a problem isolating your males from everyone else, then breeding is not for you”.  That’s when I started to get the picture that it’s ok for a male to have his own space. in fact, he may prefer it.

I do recommend this book for all new breeders, it’s has a ton of information, all of which is very helpful. It was written by experienced breeders that show their cats.[/vc_column_text][/trx_block][/vc_column][/vc_row][vc_row][vc_column][trx_block][trx_title type=”2″]What About the Girl Cats?[/trx_title][/trx_block][vc_column_text]When it comes to an intact girl cat, they’re not as territorial as the guys, but they can “mark” with urine when they’re in heat.  This is totally natural for them as it’s a way to let the males know that she’s out there using her scent.

My very first Maine Coon Queen [Ursula] does this – Lucky me right? Being new to the game, I wasn’t sure why she was peeing outside of the box. After a few more hours of research, I discovered that females will do this, especially if they’re low on the social totem pole.  Instead of calling loudly, they use a scent to attract their mate. Once spayed, this behavior will cease but until then that’s her way of letting everyone know what time it is. Now not ALL of them will do it, but it is possible.

When I learned of this type of behavior, I decided it was time for Ursula to move into her own space as well. She can’t be inside peeing all over everything. The Sassy Shack is perfect. I can easily clean and disinfect the space and she can’t ruin anything.[/vc_column_text][/vc_column][/vc_row][vc_row][vc_column][trx_block][trx_title type=”2″]Introducing the Sassy Shack[/trx_title][/trx_block][vc_column_text]Several years ago my husband and I purchased a barn type of building for our property.  Dan had an eBay store, and he used it to store his inventory. Once he discovered that the eBay store wasn’t for him, we converted it into a home office.

This meant flooring, ceilings, insulation, drywall, electrical, air conditioning and heat, and of course, internet.  We basically enclosed this building as living space. Then we used it for several years as our home office. We’re both in the real estate business, so it was a perfect space to get work done.

We decided to hire some employees which called for “real” office space. So our home office building went vacant.  I started fostering shelter kittens and this was their luxury apartment. I fostered 5 litters before my decision to breed Maine Coons came about.[/vc_column_text][/vc_column][/vc_row][vc_row][vc_column][trx_block][trx_title type=”2″]

[/trx_title][/trx_block][vc_column_text]Bringing you up to current date our detached building is now referred to as the Sassy Shack and is my little Maine Coon Cattery. The inside is divided into two spaces. One for the male and one for the females. I took a panoramic photo of the space so you could see how it looks inside.  It’s like a 2 BR duplex, each side having their own kitchen and bathroom. (Girls have a Litter Robot).

There’s also a loft area which I’ve provided plenty of climbing opportunities for them to get into the loft and hang out.

Here’s some pics of Ursula and Illuminati in the loft. 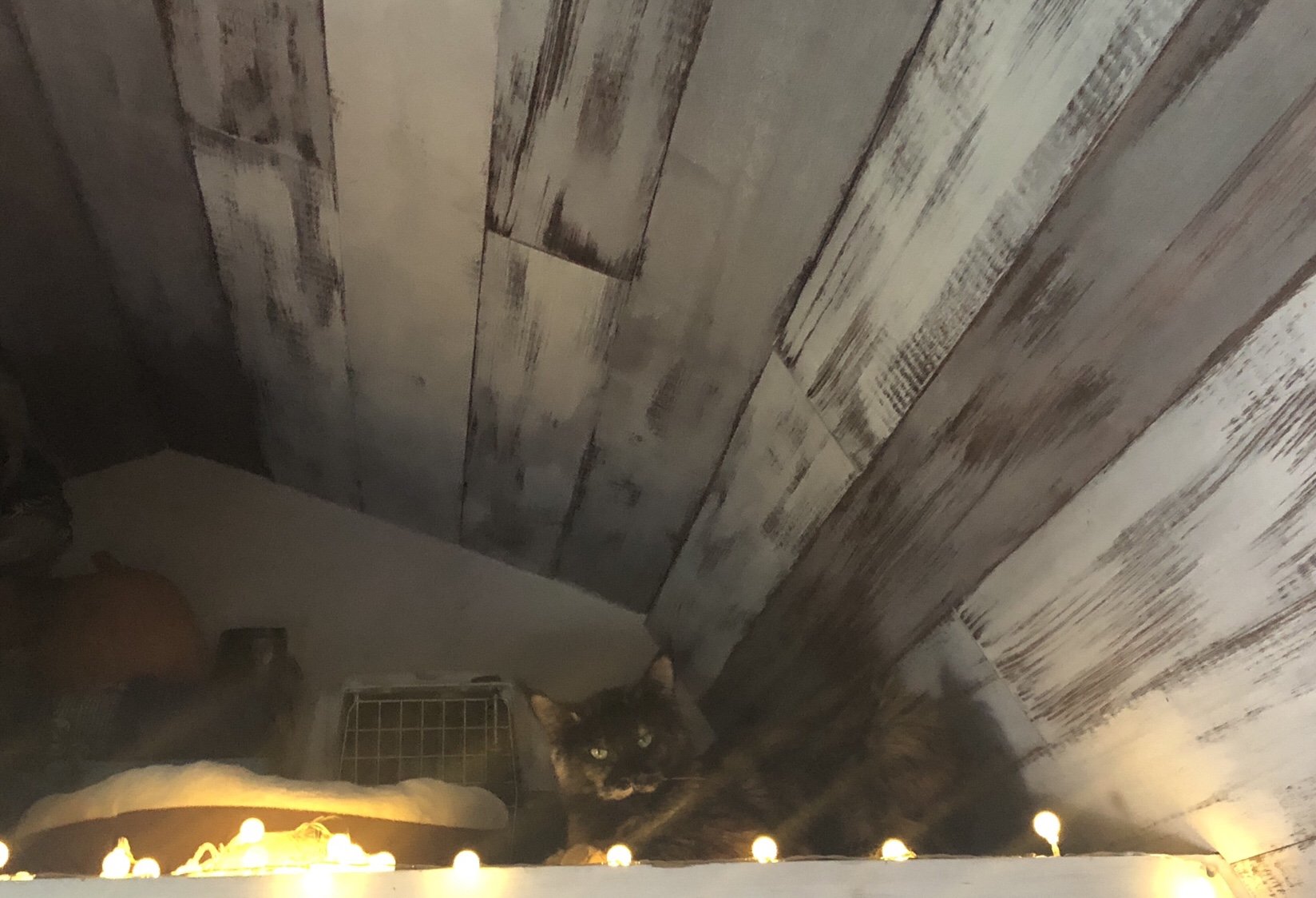 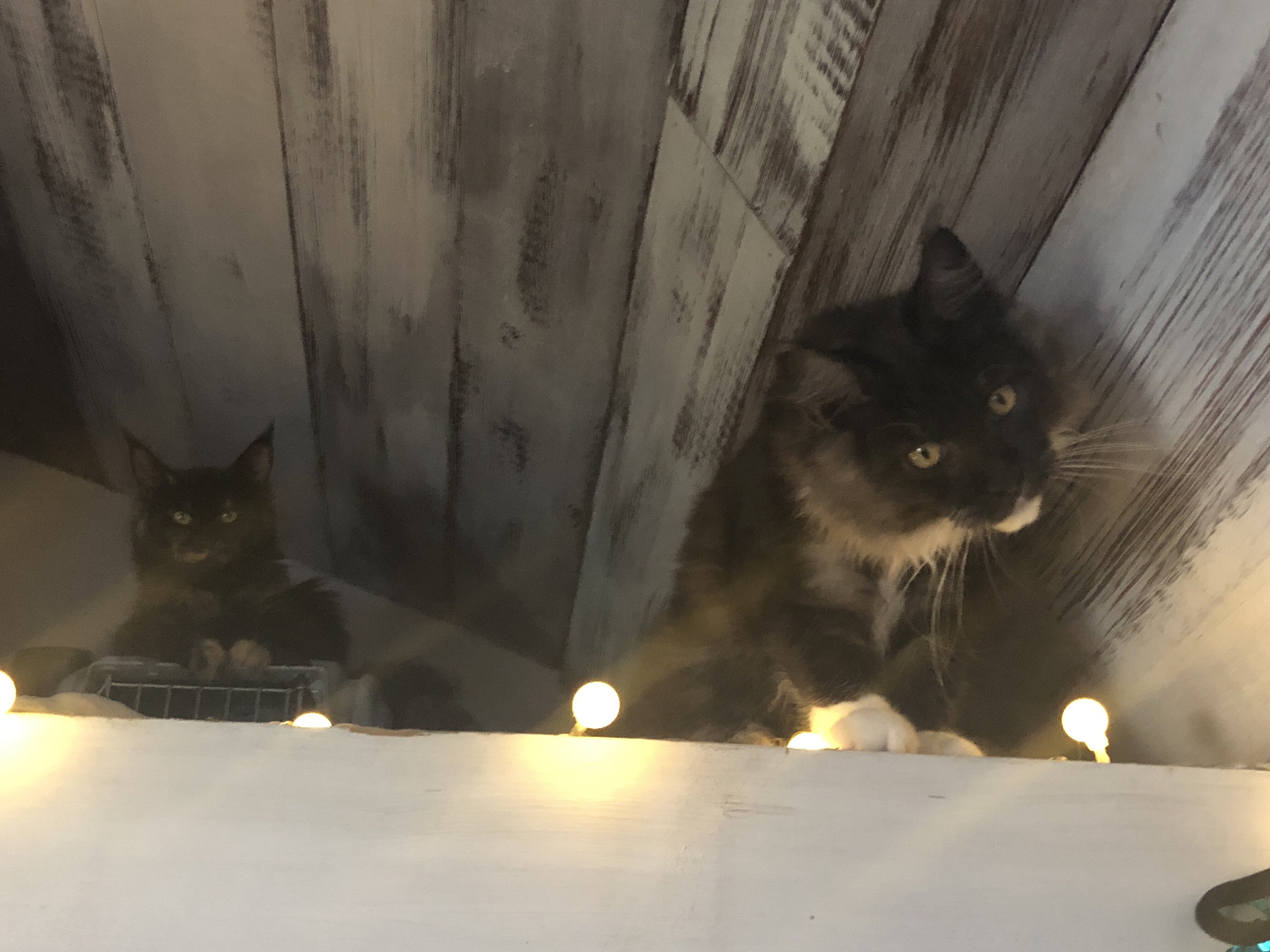 On each side of the Sassy Koonz Cattery is an outdoor enclosure, one for boys and one for girls. They each have a cat flap to access their outdoor enclosure. It took them a few days to get used to using the cat flap, but they have the hang of it now and they spend a lot of time in the outdoor enclosures. It’s so awesome to see them enjoying it. My cats aren’t allowed to roam freely outdoors, so the enclosure is perfect for them to get the fresh air and sunshine that they love. They’ll also be able to bird watch and squirrel watch!

As of the date of this post, Ursula and Illuminati share the Sassy Shack. He’s just a kitten right now so both spaces are open and free roam. Eventually, he’ll move into the tough guy [stud] side. Soon, a few more girls are moving in to their new apartment, also![/vc_column_text][/vc_column][/vc_row][vc_row][vc_column][trx_block][trx_title type=”2″]

Putting The Husband to Work

[/trx_title][/trx_block][vc_column_text]I have a really awesome husband who loves my kitties as much as I do. Even better than that, he’s totally supportive of my journey into breeding Maine Coons. We do every venture together but he has let me know that hes not attending any kitten births! Haha.

Here’s a glimpse into some of the construction efforts that were necessary for the outdoor enclosures to look awesome.

I did a ton of research on outoor enclosures, even talking to contractors about closing in space.  Aesthetically speaking, I chose these pre-made enclosures from Wayfair.  They look good, which was important to both of us.

We already had a deck on the girl side that would support the enclosure but we still needed one for the boy side. I can’t explain what Dan did because I’m completely challenged when it comes to construction, but I can post the photos I took while he was building the deck for the enclosure. This was required to be floor level with the building. When the cats use the cat flap they’re stepping onto the deck instead of the ground.[/vc_column_text][vc_gallery interval=”3″ images=”1940,1941,1942,1943,1944,1945″ img_size=”medium” title=”Sassy Shack Deck Construction”][trx_title type=”2″]

[/trx_title][vc_column_text]I’m super happy with the finished Sassy Shack! I’m there visiting them as much as I’m in my own house. It’s that cute. I am totally comfortable with the space they have, their ability to get fresh air and sunshine and go on lizard patrol anytime they want.

[/vc_column_text][vc_column_text]This first year has been a bit of a whirlwind, not gonna lie.  I finally have a sense of peace and tranquility. Everyone has settled into their spots, and I’m not shopping for kittens around the clock!  Sassy Koonz will soon have Maine Coon kittens for sale, and the future Guardians are going to be so excited![/vc_column_text][trx_title type=”2″]

[/trx_title][vc_column_text]What about the babies?? I wouldn’t forget about the babies.  When a mama is ready to have her kittens, she will move into our house. We have a dedicated nursery for mama and her kittens – equipped with a birthing box, cat trees, toys, comfy beds, litter pans, and everything the kittens need to grow up happy and healthy.

Here’s a photo of the nursery, ready to deliver kittens in that cute little birthing tent. Of course, I’ll line it with soft comfy blankets and make the mamas as safe and comfortable as possible.

Kittens have to be isolated from all cats other than their mama and other litter mates, so they will have the room to themselves while they are growing up. No cats or human visitors will be allowed in the nursery until they’re at least 8 weeks old and have had their first set of vaccinations.[/vc_column_text][/vc_column][/vc_row][vc_row][vc_column][vc_custom_heading text=”Thank you for going with me on this journey!” font_container=”tag:h2|font_size:26|text_align:left|color:%238224e3″ google_fonts=”font_family:Calligraffitti%3Aregular|font_style:400%20regular%3A400%3Anormal”][/vc_column][/vc_row]

My name is Tracy Caywood. I live in Jacksonville Beach, Florida and I'm the Guardian of the Sassy Koonz. My goal and passion is to provide you with education, inspiration, and healthy, well-socialized beautiful Maine Coon babies that you'll love forever.

This site uses Akismet to reduce spam. Learn how your comment data is processed.